Thanks go out to Happy Indulgence Books for bringing this tag to my attention, and to ReadAtMidnight for coming up with it in the first place.

This is hard to remember. I think my development as a reader has a lot to do with Harry Potter, but The Letter For The King by Tonke Dragt, the greatest achievement in Dutch children’s literature, probably started off my life-long obsession. Before that book, I mostly had my parents read to me. The Letter For The King was likely the first time a book was so gripping I couldn’t wait to finish it and did all of the reading myself.

There are many, many reasons that I’ll always love Brideshead Revisited.  The setting is one of them, as is the delicate and intricate nature of the characters. Before Brideshead Revisited, I though I knew what subtle writing was, and I thought I, as a writer, was good at being subtle. Nothing is further from the truth: Evelyn Waugh is the master of subtlety and that gift makes for an astonishing read.

I’m so done with Divergent. I don’t want anything to do with the whole franchise. I don’t know anything about it, anything at all, except that lots of people seem to love it and it looks like an unoriginal Hunger Games meets Shadowhunters kind of thing. I don’t mean to offend anyone, but the hype surrounding this series has just completely killed any and all interest I might have had in it if things had been different.

If I had to pick just one, I’d probably go with The Princess Bride.  I think this book has become a classic by criticizing many classics, by taking a critical look at traditional stories of adventure, romance and magic. That’s why I love it. This books has too many tropes in it to name, but still I’ll name a few: damsel in distress, true love’s kiss, swordfighting, miracles, an evil monarch, an honorable Spaniard, a very kind, patient grandfather, white horses and a bunch of other inconceivable things. But it’s by using these tropes, respecting them and still subverting them in modern ways, that The Princess Bride achieves greatness.

I really want to read Possession by A.S. Byatt. It’s a 555 page novel, described on Goodreads as follows:

“Possession is an exhilarating novel of wit and romance, at once an intellectual mystery and triumphant love story. It is the tale of a pair of young scholars researching the lives of two Victorian poets. As they uncover their letters, journals, and poems, and track their movements from London to Yorkshire—from spiritualist séances to the fairy-haunted far west of Brittany—what emerges is an extraordinary counterpoint of passions and ideas.” Source

It’s not just the page count that keeps me from reading this book, although the pages are big and the typeface is tiny; it’s also the sheer ambitiousness of a novel as layered and complicated as this one. I’m told the story is incredibly rich and intricate and while this appeals to me, it also scares me off.

Never Let Me Go by Kazuo Ishiguro kept me up at night. Not necessarily because it was such a pageturner. I actually remember this being a not too faced-paced read with compelling and complex characters and storylines, but not particularly exhilarating ones. What kept me awake about Never Let Me Go was what haunts me about all good science fiction. It’s the knowledge that if the human race, if we lost just a little bit of our humanity and our morals and gained just a little bit of knowledge, could end up exactly like the society in the story. If you, like me, enjoy doubting the stability of the society you live in and the boundaries of human endeavor, go to your television set and watch Black Mirror. It has the same uncanny atmosphere.

Don’t get me started on OTP’s. Seriously, don’t, you’ll regret it. Well, if you insist…

However, hands down my all-time OTP of the literary world is Jude and Willem from A Little Life, because of course it’s not truly an OTP until both characters become the victim of unbearable suffering.

Franny & Zooey  by J.D. Salinger, which is a precious 201 tiny pages, is definitely what I’d call a quick read. I read it in a single afternoon, absolutely loved it, and then I started thinking about this quote and fell into an existential crisis:

I don’t know what good it is to know so much and be smart as whips and all if it doesn’t make you happy.”
― J.D. Salinger, Franny and Zooey

Harry Potter, duh. You knew this about me. In spite of everything I have accused J.K of in the past, I am secretly delighted whenever something new is added to the Wizarding World. Also, I’m still rooting for a prequel that focusses on The Marauders. Remus and Sirius would be fighting for both Werewolf and LGBTQIA+ rights, James would be a cocky little asshole that ends up redeeming himself when he falls in love, and Peter would just hang out with them for comic relief. Not to mention that Lily would be the fiercest of the fierce.

I never expected much from The Hunger Games. As I said, I’m weary of the dystopian YA novel (looking at you Divergent) with the love triangle and the unlikely plot twists. I never really thought I was into dystopian novels, but then there was The Hunger Games, and it was great.

It’s not a series, but I was really excited to read The Secret History, by Donna Tartt, even after everyone had already told me how great it was. This is unusual for me, because mostly I tend to find hypes off-putting, but it was different with this book. I was right in my assessment, though; I loved it.

If there is a God, please let him gift me this set, which you can buy here. 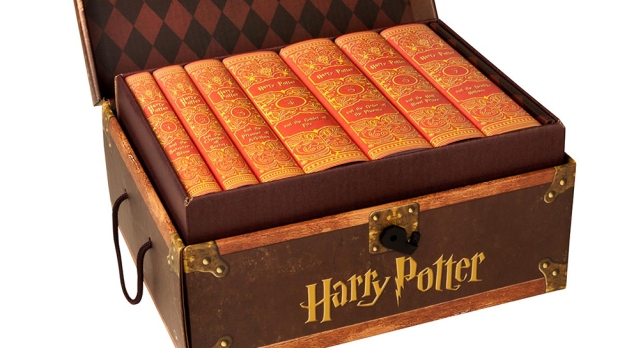 I will forever and always buy everything written by John Green, no questions asked. I believe that whenever he puts his name on something, that means it’s great. His stamp of approval is worth a lot to me, so I’m also likely to buy whatever he recommends.

I waited about three million years for Carry On to come out, because I’ve been shipping SnowBaz since Fangirl. Then it came out, and it was really, absolutely, definitely worth the wait.